If you’ve been injured in a bike crash, then the law may entitle you to significant damages as compensation. Many injury victims, especially bike riders, don’t realize that they may have a legitimate legal claim. Since you may have a legitimate claim, it’s important that you don’t assume otherwise.

We’re here to let you know that you’re not alone. Cycling accidents are extremely common throughout the United States, and ranking high on the list are accidents where a car hits a bicycle. Do not be a statistic. We encourage you to call us at 1-800-THE-LAW2 for a free consultation. We can help you take the next steps towards a financial recovery. If you’d like to learn more a bit more about bike crash lawsuits, however, keep reading.

What are the Chances of Getting in a Bike Accident?

Unfortunately, it is very likely for cyclists to get into bike accidents. American drivers and roads are simply unfriendly to bicyclists thanks to decades of pro-driving policies. Accident, injury, and fatality statistics bear this out. According to the CDC, nearly 1,000 bicyclists die, and over 130,000 are injured, every year in the United States alone. That’s an enormous number! It is not hard to see just how dangerous it is for bicyclists, and just how common accidents are.

What are Common Causes and Types of Cyclist Accidents?

Cycling accidents can be caused in variety of ways. It’s also worth noting that the most common “location” for a bike-car collision is at an intersection. Some of the most common causes include:

Depending on how the cycling accident was caused, you’ll want to explore a lawsuit against multiple different defendants. For example, if you were injured at an intersection, it’s possible that you can sue both the driver and the City (if you can show that the traffic lights weren’t working, or that the visibility at the intersection was poor, or some other issue).

Suing multiple defendants is an effective strategy for securing compensation, as each defendant might not have enough to cover all your losses. To explore your different options, you’ll want to work closely with a bike accident attorney who can identify the issues and possibilities clearly.

Who is at Fault When a Car Door is Opened on a Cyclist?

In other words: who is at fault when a cyclist gets doored? Fault is a concept in law that reflects who bears responsibility for the accident. Let’s take a moment to understand how fault might work in this accident context.

Fault can vary depending on the specifics of the case. If the door was opened into a roadway or in an area where bicyclists are expected (or even encouraged), such as a bike lane, then the person who opened the door would almost certainly be found at-fault. Generally, when someone is opening a door into an area that is trafficked, they have a responsibility to exercise caution and avoid “dooring” others.

If the roadway is restricted and doesn’t allow cyclists, however, then the cyclist could possibly be found at-fault. That being said, it would be an unlikely and uncommon scenario.

Where Do Most Bike Accidents Occur?

How Much Space Must You Give a Bicyclist When You’re Driving a Car, Even if it Means Going Into the Next Lane to Do it?

Some states do have specific amounts enshrined in law. For example, in California, drivers are required by law to give bike riders at least three feet of space. That being said, there is no amount of space that is considered enough in every possible situation. Drivers are supposed to give enough room to avoid a collision with the bike rider, and this can vary depending on the circumstances. In poor visibility and poor weather conditions, the driver may be expected to give more space than in better conditions.

Failure to give enough space can lead to liability. If you were a cyclist and were not given enough space, and this led to a collision, then you could potentially sue the driver for negligence. This can give you a strategic pathway to compensation.

It’s worth noting that the driver may try to counter this by arguing that you stayed in proximity when you should have established more distance. This is a decent argument, but you can counter it by showing that you were not aware of them passing so closely, or that you didn’t have the option to move away given other traffic.

Ready to pursue your bike crash claims and secure compensation? Call 1-800-THE-LAW2 for a free consultation with an experienced bike accident attorney in our network. Our attorneys have experience working with bicyclists who were hit by a car, and with those involved in other accident-related bike fails, like a right hook accident. Reading news headlines, it can start to feel like vehicle safety recalls are being issued daily. While the number of car complaints and vehicles affected continues to grow, you might ask yourself if this means vehicle safety is declining?    The […] Driving to and from work, taking the kids to soccer practice, and weekend getaways are standard activities for millions of people who own vehicles across the nation. And while accidents happen everyday, you may not put a lot of thought […] 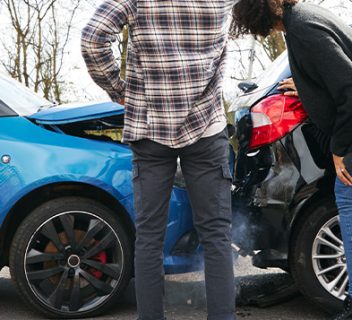 Rear End Collision | I Got Rear-Ended, How Much Money Will I Get?

Injured in a rear end collision? You’re not alone. According to one study, rear-end collisions account for approximately 29 percent of all motor vehicle accidents causing serious injury. Additional statistics from the Insurance Information Institute reveal that rear-end crashes are […]