Sideswipe Accident | Steps to Take After Being Sideswiped

Sideswipe Accident | Steps to Take After Being Sideswiped

If you’ve been in a sideswipe accident, you might be considering legal action. After all, sideswipe accidents can be quite dangerous, as the offending vehicle can cause direct damage to the person in the seat closest to impact. The impact itself can also veer your own vehicle off-course, or even flip it over.

Naturally, sideswipe impacts contribute to serious and often fatal injuries. We encourage you to contact us if you’ve been in a sideswipe accident, as it’s important that you speak to an attorney about your claims. Call us at 1-800-THE-LAW2 to speak to an experienced car crash attorney for guidance. That being said, read on to learn more about sideswipe collisions and how they work.

How is Fault Determined in a Sideswipe Accident?

Can You Get Whiplash from a Sideswipe?

Yes, absolutely. It’s quite common for the victims in a sideswipe collision to suffer whiplash injuries. Sideswipe collision victims often sustain two sets of injuries, from the initial impact and from subsequent impacts. The sudden shifts in direction due to multiple impacts can cause severe whiplash.

Other possibilities for physical trauma include:

What are Common Causes of Sideswipe Collisions?

There are a variety of factors that contribute to sideswipe accidents. In nearly every situation, the accident could have been prevented. Prevention means paying attention to the road at all times, and avoiding any unnecessary distractions. Take a cautious approach. Give space to other vehicles, even if you have right-of-way.

The most common factors influencing sideswipe collisions include:

These factors simply contribute to the risk, however. Sideswipe accidents actually occur due to the following failures:

Say a driver is merging onto the highway from an off-ramp but fails to gauge the distance between themselves and other cars correctly. This driver tries to get into the nearest lane of traffic quickly, causing them to sideswipe another car. Merging can also be a danger when merging from rest. Sideswipe parked car accidents are very common, as drivers are often not fully attentive when they get back into their car.

Perhaps a driver speeds because they are under the influence of a controlled substance or because they are late to a meeting and trying to make up time. As they navigate between cars, the driver can accidentally drive over their lane’s lines and sideswipe one or several vehicles. Trying to speed around sharp curves can also cause sideswipe issues.

Both merging and changing lanes requires being mindful of cars and trucks that are close by. If a driver changes lanes without being mindful of surrounding vehicles and how fast they are going, a sideswipe accident can occur. In some instances, the offending driver might not see the person they hit if the driver is in a small vehicle or on a motorcycle. These operators are typically in the offending driver’s “blind spot” and said driver did not look behind them before switching lanes.

In addition to driving while distracted, intoxicated, or on drugs, some drivers are aggressive due to “road rage.” They take out their frustrations on those around them, and while such drivers usually do not intentionally try to injure others, such accidents still occur. A frustrated, aggressive driver might try to get close to another car or hit it, resulting in a sideswipe collision.

Steps to Take After a Sideswipe Incident

The first step to take following a sideswipe accident is for the driver to ensure they and their passengers are okay. If anyone in the vehicle requires emergency medical care, call 911. Once everyone has received the care they need, it is essential for the driver to report the accident to the local police, whether they believe it was intentional or not. Police officers arrive at the scene at the same time or before the EMTs to take statements and create a detailed report.

The accident must also be reported to the driver’s insurance company, with carriers requiring copies of the medical and police reports for evidence purposes. Do not engage insurers without an attorney, however, as they will use the opportunity to undermine your claims. This is absolutely critical to understand.

Speak with an attorney as soon as possible. Your attorney will explain your legal rights and help you identify next steps. If possible, the attorney will file a claim on your behalf, requesting damages that compensate you for your injuries and other losses.

They will also take steps to begin negotiations with the opposition, in the hopes of securing a favorable sideswipe accident settlement. That being said, it is rare for a sideswipe collision or any vehicular accident to go to trial.  If the defendant is hostile, difficult, or refuses to pay out a fair settlement, the case will have to be decided in court.

If you were recently in a sideswipe accident, it’s important to seek legal assistance as soon as possible. Call 1-800-THE-LAW2 today to discuss your case in detail with an experienced car accident attorney. Consultation is free and no-commitment, so there’s no downside in picking up the phone and having a conversation with one of our attorneys!

How can I tell who sideswiped who and which car is at fault?

What is a sideswipe collision or accident?

What happens in a sideswipe car accident is that two vehicles collide, both at a side-angle. This definition, or meaning, includes two types of collisions. When the vehicles are traveling in the same direction and when they’re traveling in the opposite direction. The dangers are severe in both scenarios.

In a sideswipe same direction collision, for example, a sideswipe can push a vehicle quite a bit off-course. This often happens in situations where one or both of the vehicles is moving past the speed limit. This can cause severe injuries from the vehicles spinning out and having a second collision, with a tree or other hazard, or even another vehicle.

Why are sideswipe accidents dangerous?

Sideswipe accidents are so dangerous due to the forceful impact of two cars hitting each other from the side angle. Car doors have fewer protections against impact, as the material does not crumple into itself. Instead, any impact tends to injure the person in the seat next to the door. Rideshare services like Uber and Lyft have seen a rapid rise in popularity in recent years, and for good reason. These companies have disrupted the transportation industry, offering a convenient alternative to traditional taxi services and public transportation.  However, despite […] What is the Most Common Motorcycle Injury?

Motorcycles pose a safety risk, even for the most cautious drivers on the road because they are less stable and less visible than cars, vans, and trucks. When motorcycles crash, riders lack the protection of being enclosed and are more […] 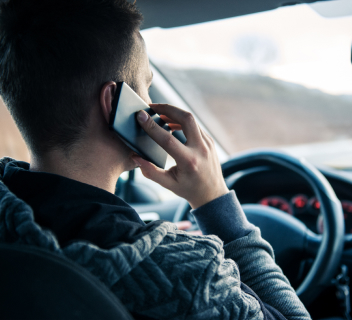 What is the Difference Between Negligent and Reckless Driving? | Car Accident Injury Attorney

Negligent and reckless driving cases may result in injuries and damages that are essentially the same. If there are similar injuries or damages to one’s property, you may wonder: What is the difference between negligent vs reckless driving? The latter […]